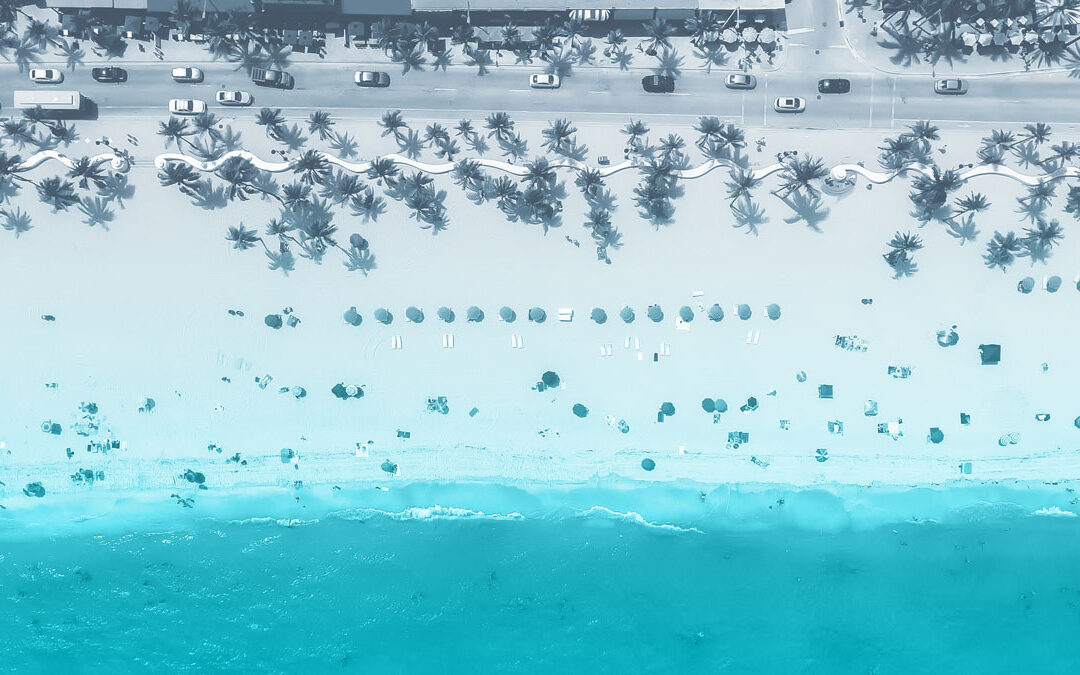 With drug addiction and overdose continuing to plague the U.S., many people are realizing that the “War on Drugs” being waged by law enforcement is not doing enough to reduce these numbers. In fact, law enforcement efforts may not be having much of an effect on these numbers at all. From 2014 to 2016, the rate of undetermined and unintentional drug overdose deaths more than doubled in Florida. Among those suffering from addiction, the luckier ones find their ways into Florida rehab centers. Still, drug addiction remains a deadly issue, and the first step to addressing it is understanding its breadth and scope.

Florida is one of the worst states for drug overdose deaths. While the data is still incomplete for 2019-2020, the CDC states an average increase of 13.2 percent in the rate of overdose deaths across the U.S. for this year. In Florida, that percentage change is nearly double, at 25.1 percent. The CDC predicts that when all the data is in, we will see a rise from 4,998 overdose deaths in 2019 to 6,253 in 2020. The current flow of mortality data is the primary source of data for the CDC’s projections. 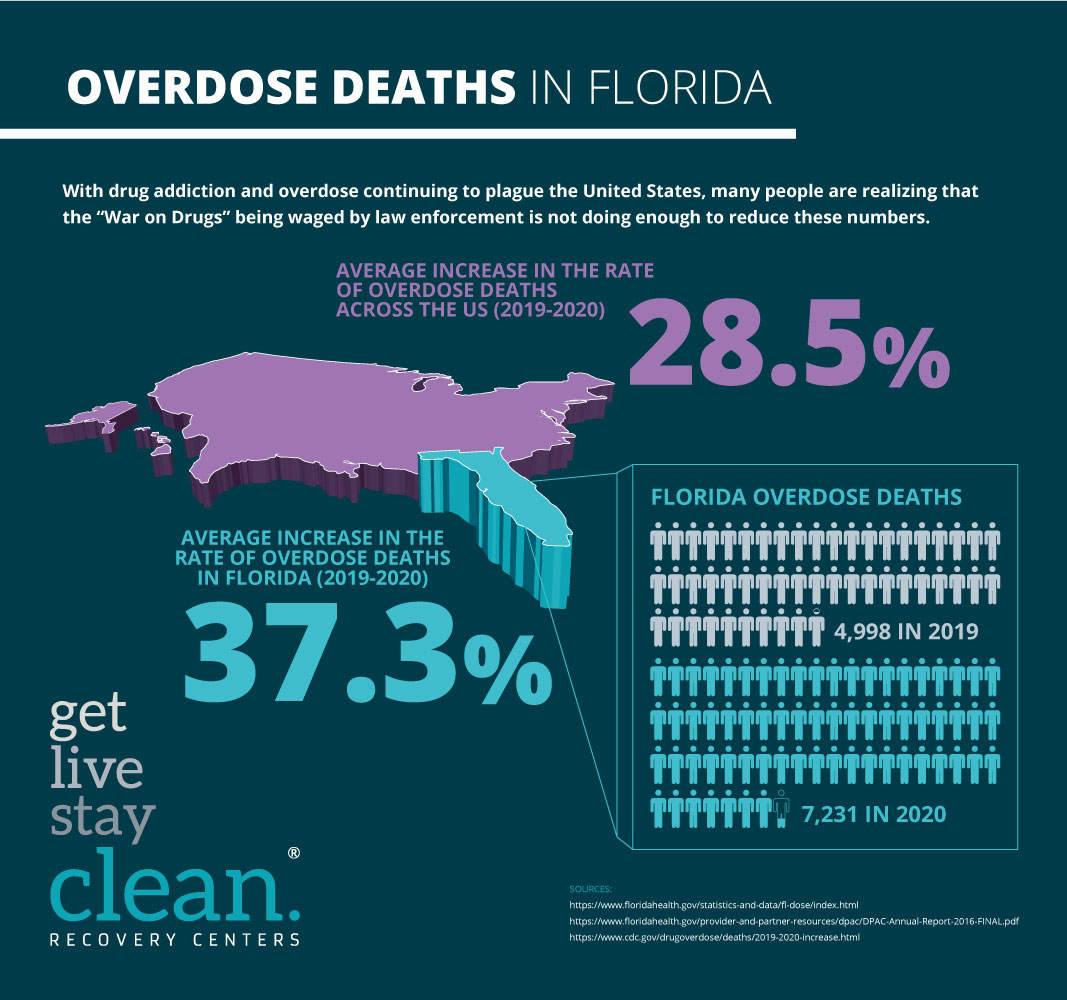 In its data map, the CDC includes statistics for various different drug types across the U.S. From 2015 to 2020 there appears to be a steady increase in overdoses from psychostimulants and cocaine, whereas rates for heroin and natural opioids remain fairly consistent. The most noticeable and significant statistic, however, is the rise in overdoses from synthetic opioids. While methadone is not included in this category, synthetic opioids include drugs such as oxycontin, morphine, and fentanyl. The scale of this can be conveyed by comparing the numbers. In January of 2015, there were between 5,000 to 6,000 deaths from both cocaine and synthetic opioids. By April of 2020, the number of cocaine overdose deaths had risen to approximately 18,000, whereas the number of synthetic opioid overdose deaths rose to approximately 42,000. While overdose deaths from any kind of drug abuse warrant attention and action by the medical community, it is clear that the U.S. is facing a real opioid crisis. 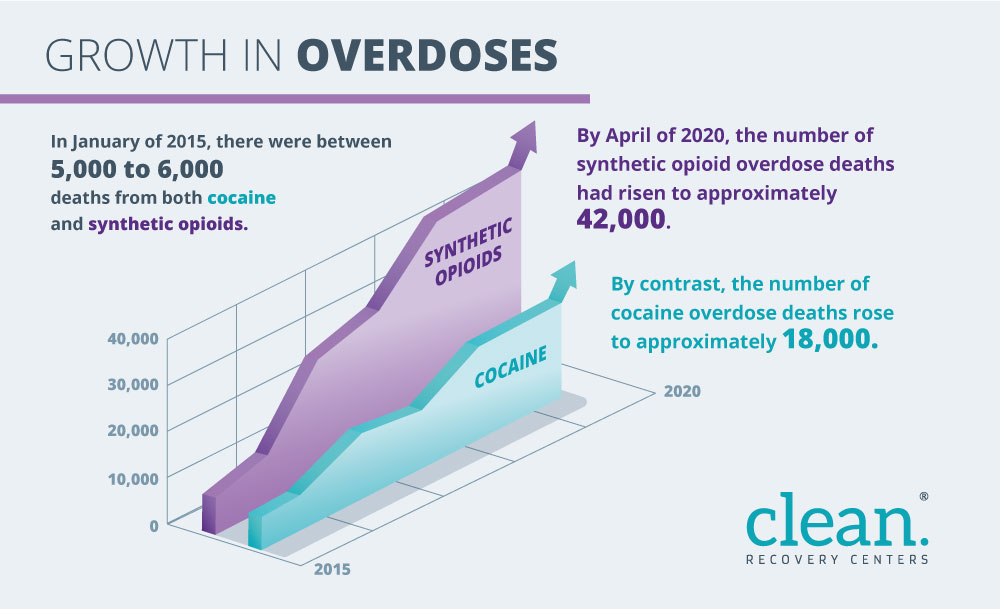 It is important to consider, however, that these are the average numbers across the entire U.S. In 11% of U.S. counties, there are enough opioid prescriptions for every person to have one. This high number of prescriptions can lead to a lot of re-selling happening on the streets. 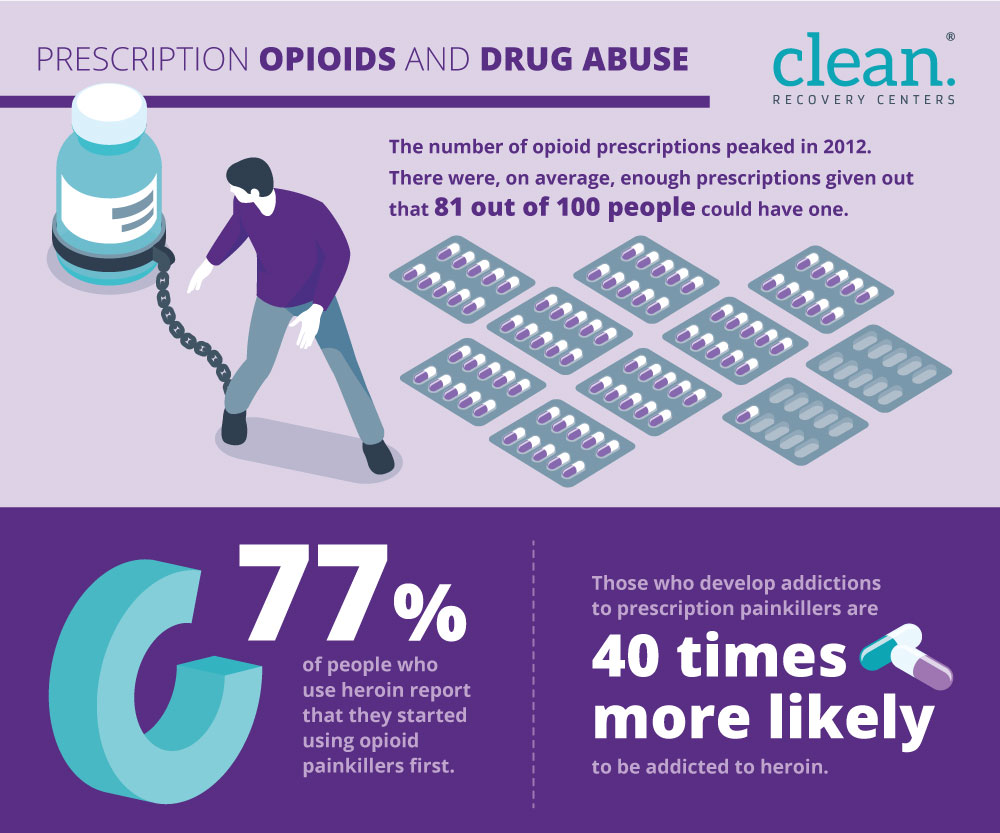 The Opioid Crisis in Florida

The trends of drug addiction and death in Florida follow similar patterns to those that have been observed all across the country. Synthetic opioids are the leading cause of overdoses, with the rate having tripled since the turn of the century. Things have gotten so bad that Governor Scott declared the opioid epidemic a statewide public health emergency in 2017.  Opioid-involved drug overdose deaths have continued to grow in spite of the Prescription Drug Monitoring Program that was recently added to Florida statutes. What more adamant monitoring of prescription practices has revealed is that approximately 64 percent of all opioid prescriptions are written by 10 percent of prescribers. This indicates that a minority of deviant medical practitioners are over-prescribing, thus contributing to the rates of opioid addiction in Florida.

In an effort to curb the impact of prescription opioids on addiction and overdose rates, Florida banned physicians from dispensing Schedule II and III substances from their offices, increased law enforcement raids, and enacted regulations on how pain clinics prescribe these drugs. This led to a significant reduction in the number of people who were getting excessive opioid prescriptions. From 2010 to 2014, there was a 70.6 reduction in oxycodone and alprazolam-related deaths. There were, however, some unintended consequences of these new legislative restrictions.

Over 77 percent of people who use heroin report that they started using opioid painkillers first. Those who develop addictions to prescription painkillers are 40 times more likely to be addicted to heroin. While the number of prescription opioid deaths decreased, heroin death rates increased by 462 percent. It appears that by limiting access to prescription opioids, those suffering from addiction were forced to turn to heroin instead. This comes as no surprise when one considers that an 80mg OxyContin tablet costs $60 to $100 on the street now, while heroin can cost as little as $9 a hit. It is clear that stricter laws and more stringent prescribing regulations are not going to solve the opioid crisis on their own. So what will work to address this crisis?

Studies show that strengthening people’s connections among their families and communities can lead to a decreased likelihood to abuse drugs. In regards to prescription drug misuse, families who participated in these programs demonstrated reduction rates between 20 and 65 percent. One such program, the Strengthening Families Program, trains families in evidence-based skills to improve school performance and competencies, family relationships, and parenting skills, and reduce delinquency, alcohol, and drug abuse. This program does not specifically include content related to prescription drug abuse, and yet its success in reducing those rates is now well-documented.

Criminalizing and cracking down on people suffering from drug addiction labels them as criminals, and does not do anything to address the roots of their problems. The data shows that the best way to help people dealing with drug problems is to improve their access to medical treatment options. An analysis of 25 studies showed that opioid-dependent drug-injecting users showed lower rates of injection use and opioid use after treatment with buprenorphine or methadone. When dosed properly, methadone blocks the euphoric effects of heroin while reversing withdrawal symptoms.

The idea behind care coordination is to provide additional resources to the survivors of drug overdoses. Current research shows that patients who continue with outpatient treatment after being discharged from inpatient rehabilitation facilities have much better odds to avoid relapses resulting in deaths. Among those who are hospitalized due to opioid addiction, only 40 percent receive follow-up services. Improving the availability of these resources and providing better access could go a long way in ameliorating the epidemic of opioid-related deaths.

Getting the Help You Need from a Drug Rehab Center

When you enroll in a rehabilitation program, the staff will work with you to help return to a level of productivity that empowers you to achieve your dreams. Clean Recovery Centers is a great option because they help you to reconnect with your friends and family. This rehabilitation clinic can help you to avoid worsening health conditions resulting from drug addiction and will reduce the likelihood of early death.

Clean Recovery Center offers a sober community to support you in living clean. They will teach you healthy means to manage your wellness such as yoga, acupuncture, and massage therapy. Recover from the effects of substance abuse with referrals to detox centers in Florida. The Three-Phase approach combines a 12-step program with the latest clinical therapy techniques. Contact Clean Recovery Center today and take control of your life again so you can reach your true potential.

View the full Infographic about statistics about the use of drugs in the state of Florida and a look at the consequences, such as overdose deaths.