Fentanyl – A Scourge On Our Planet 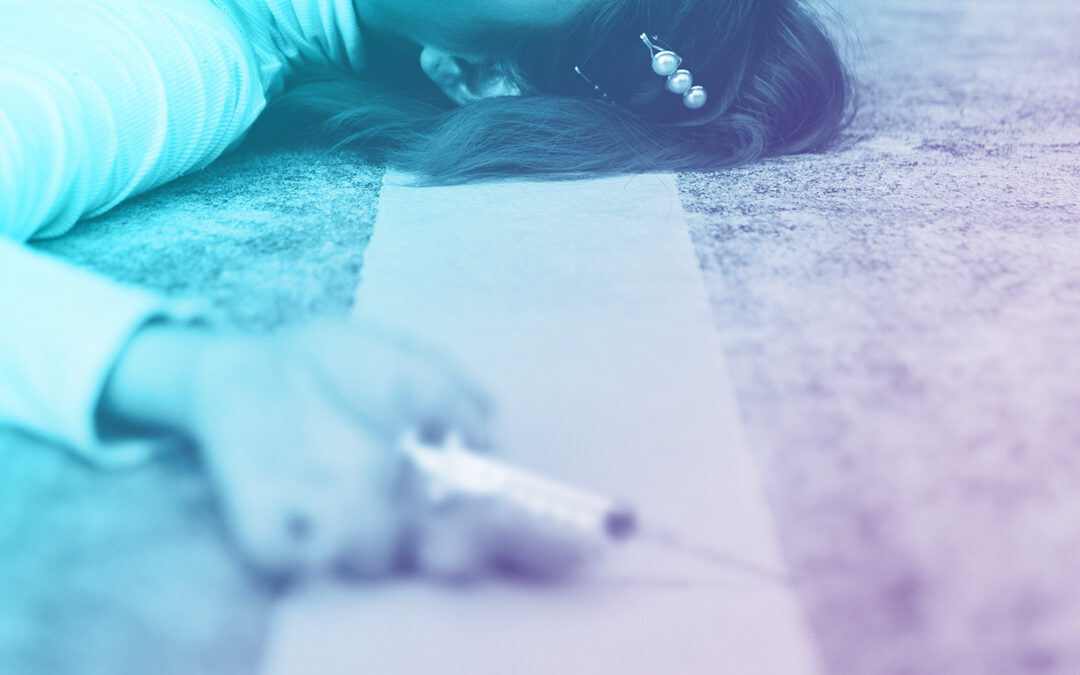 Fentanyl – A Scourge On Our Planet

Fentanyl is pouring into our country and places around the world at a record breaking pace. Drug overdoses are skyrocketing. The CDC’s National Center for Health Statistics estimates there were over 100,306 drug overdose deaths in the United States during 12-month period ending in April 2021, up 28.5% the same period the year before. Opioid overdoses, (Fentanyl is a synthetic opioid), accounted for most of these deaths.

Fentanyl is now the leading cause of death for people 18-45 years old in the United States, according to the latest data from the CDC. It is estimated to have killed twice as many people in this age group as did COVID-19, car accidents, cancer, and suicide, combined. In the past 15 years, Fentanyl deaths have risen 12x among white Americans, 24x among African Americans and 30x among Native Americans. 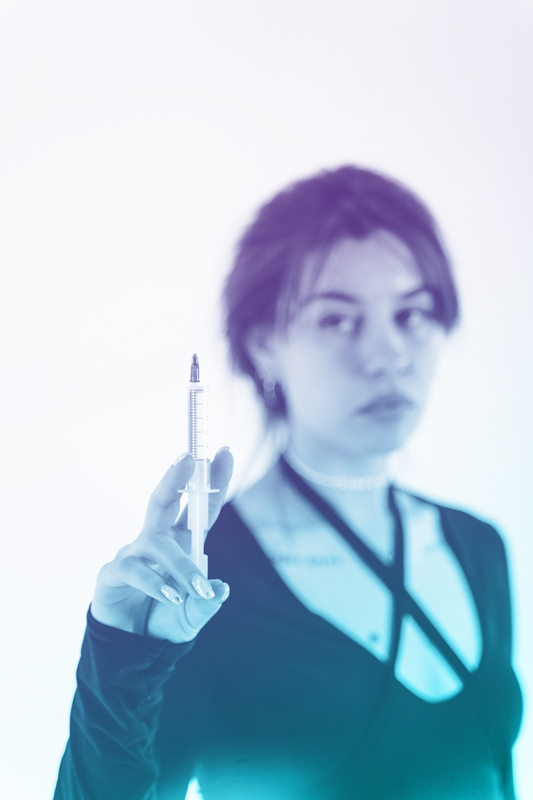 The drug was first synthesized in 1960. It was marketed for the treatment of moderate to severe pain, specifically long term pain. Fentanyl works by binding to opioid receptors in the brain responsible for regulating pain and emotions. It comes in many forms including nasal sprays, dissolvable strips and tablets, patches, and lozenges. However, it is the Illicit Fentanyl powder that is used primarily to lace with other drugs.

FENTANYL USE AND ABUSE

Because Fentanyl is so powerful and cheap, it is added to heroin and many other illicit drugs to increase their potency. Users most often do not know that whatever drugs they are consuming may be laced with Fentanyl. How powerful is this drug? See the below illustration. That miniscule amount by the penny is all it takes to kill a person. The second illustration shows the equivalent amounts of heroin, Fentanyl, and Carfentanil which is 100 times stronger than Fentanyl. 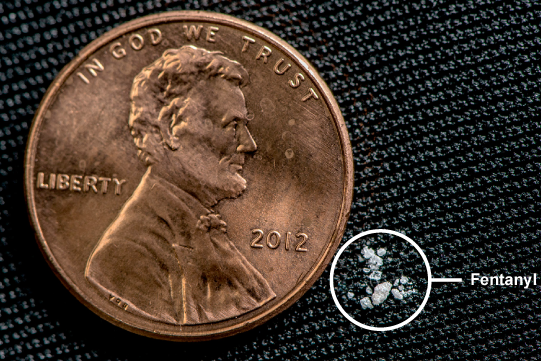 A potentially fatal dose of Fentanyl, with US penny for scale.
Photo credit: gao.gov | Source: GAO-21-499 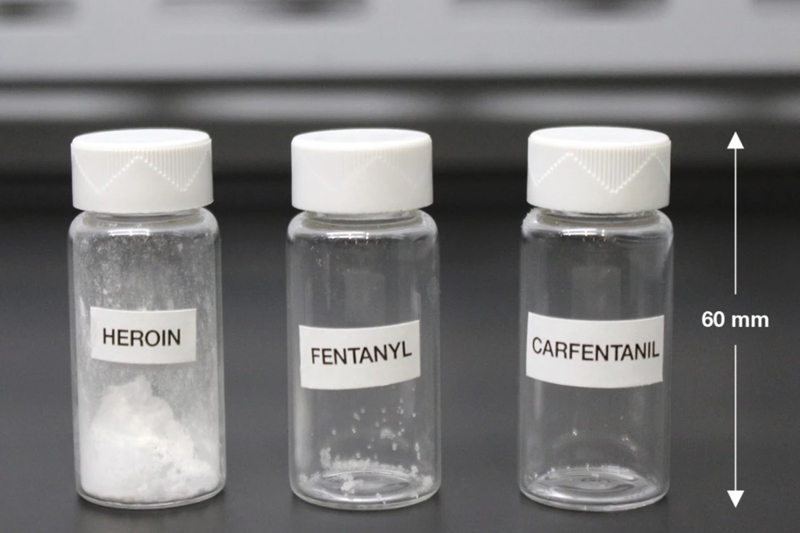 Fentanyl is manufactured in China and Mexico and imported into the United States. Regarding the lacing of drugs with Fentanyl, it is easy for drug dealers to do this because the substance they are using is a white powder. It can easily be disguised and mixed in with heroin, methamphetamine, cocaine, and other drugs. Fentanyl is being put into pills that look like Percocet, Adderall, Valium, etc., and are being marketed on the internet. There is no way to tell how much Fentanyl is being put into these pills but we have seen one or two such pills kill people.

The Fentanyl epidemic is also impacting older people. People on Medicaid or Medicare. Some are buying pills off the internet to save money. Some of these pills are laced with Fentanyl. As a result, older people are inadvertently overdosing and dying.

Most recently it was in the news that a small group of spring breakers in Florida consumed cocaine. It turned out that it was laced with Fentanyl. The people who consumed the cocaine overdosed. Thankfully, they survived. Another couple of people who tried to help their friends by giving them CPR ended up in the hospital from exposure to the Fentanyl in the tissues and airways of their friends.

Being that Fentanyl is so powerful, it is extremely addictive. There are a number of signs to look out for. If a person is using more to achieve the same high or using to avoid negative symptoms of Fentanyl withdrawal is very likely addiction has set in. Preoccupation with thoughts of using Fentanyl is another strong sign. If the person can’t stop when they want to and is opting out of work or social activities there is a very strong chance, they have become addicted.

When a person becomes addicted to Fentanyl, they will experience horrific withdrawal symptoms when they do not have it available. These symptoms can begin 6 to 8 hours after their last use. There are many frightening and painful withdrawal symptoms including muscle weakness, increased heart rate, insomnia, acute anxiety, increased respiratory rate, diarrhea, anorexia, and others.

WHAT CAN BE DONE?

There are horrific Fentanyl stories in the news every day. We lose over 300 people a day to drug overdoses and the majority of these are associated with Fentanyl whether it is direct consumption or the drug consumed has been spiked with the substance. The major question is, “What can be done about this?” Local, state, and federal governments and certain non-profit entities have tried and are trying various strategies. Some of these entities are attempting to restrict supply. Others are suggesting more regulation emphasizing prevention and increased penalties for the diversion of controlled drugs. A number of cities and states are trying drug take-back programs

Another course of action that is being widely discussed is producing more effective strategies influencing prescribing practices such as on opioid prescribing policies. Better coverage and reimbursement of nonopioid pain management drugs is also an idea. Further tightening up prescription monitoring programs has been suggested.

There is considerable discussion around strategies to reduce demand including patient education programs, targeted patient education programs, and mass media campaigns to the general public. Others believe that strategies to reduce harm may be more effective approach. Such strategies include ideas around increasing the availability Naloxone to reverse overdoses, community-based programs, programs to reduce disease transition such as syringe exchanges, supervised injection facilities, drug checking, and behavioral interventions.

While many of these ideas may have great potential, we are simply not implementing effective strategies in a concerted manner across this country or globally. It almost seems like we are throwing crap against the wall and hoping some of it sticks. This is no way to tackle a scourge like what we now have with Fentanyl and opioids, in general. Tightening up the southern border may be a good first step. Use and overdoses have increased exponentially since that border security was reduced. That would hopefully reduce the supply, at least while we figure out what to do next. We are not certain what “next” might look like, however, we are certainly willing to do our part to assist with any such efforts.