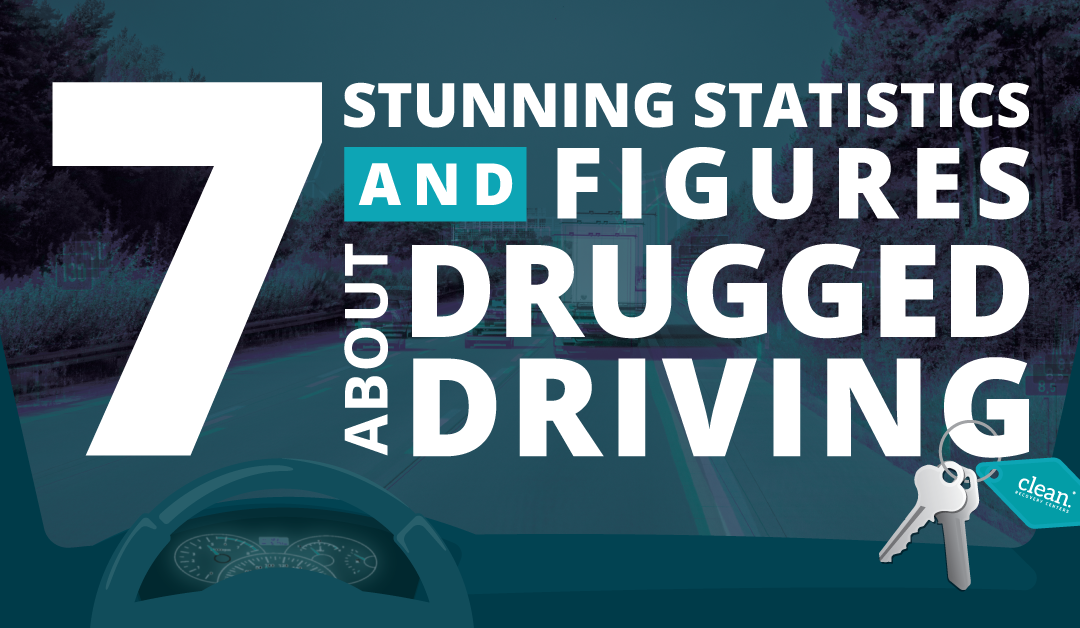 Since 2012, 19 states have legalized recreational marijuana, and it’s predicted that this number will continue to grow. Once considered an illicit substance, marijuana is now commonly perceived as no riskier than alcohol, and this shift reflects a much bigger change in the way that drugs are viewed. Evidence suggests that drug use of all kinds — not just marijuana — is on the rise, and this increase is proving to be deadly. Drug users aren’t the only ones who are being harmed by their actions. Every time an intoxicated person gets behind the wheel, they endanger countless other drivers on the road.

Many people who engage in this behavior are not doing so for the sake of a thrill or because they are attracted to risk. Rather, drugged driving is typically indicative of a serious substance abuse problem that needs to be addressed and treated. These seven figures and statistics prove drugged driving has become a fatal epidemic in the U.S. that must be addressed and remedied.

According to the 2018 National Survey on Drug Use and Health, 12.6 million people over the age of 16 drove while they were intoxicated by illicit drugs. Illicit drugs are defined in the study as any of the following:

This figure illustrates the frequency of such behavior, but frequency should not be mistaken for acceptability. Driving while impaired by any of these substances can compromise psychomotor skills, leaving a driver with impaired cognitive functions and slower reaction times. This puts the driver and other motorists at a dramatically increased risk of injury or death.

The same National Survey on Drug Use and Health, conducted only a year later in 2019, revealed that 13.7 million people over the age of 16 admitted to driving after using illicit drugs, and 12.8 million of those disclosed that they had driven while intoxicated by marijuana. This represents a staggering increase of 1.1 million people within the short time span of one year. What could have caused such a substantial spike in drugged driving rates?

There are many factors that impact national rates of drug use and drugged driving. The vast majority of drivers who admit to drugged driving indicate that they drive after marijuana use, so the increasingly lax attitude towards this drug is likely a part of the problem. Because of its spreading legalization, many people mistakenly assume it is safe to drive after partaking. They forget that marijuana slows reactions times and impairs judgment, causing accidents and fatalities. 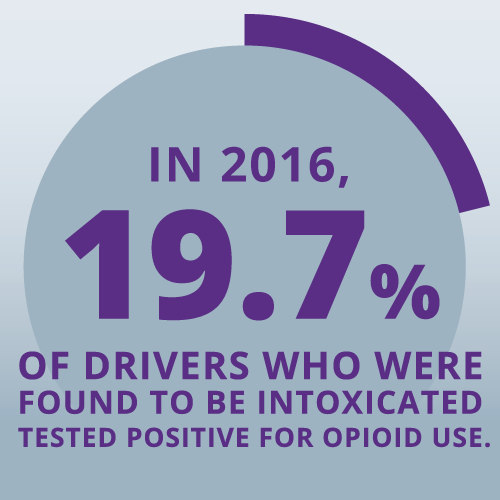 The phrase “the opioid epidemic” has become a common talking point among politicians and medical experts, but the emergence of this discourse seems to have little impact on the epidemic itself. Indeed, despite discussion of the problem, it continues to worsen, as do the related drugged driving rates. In 2016, it was reported that 19.7% of drivers who were found to be intoxicated tested positive for opioid use.

Opioid use is particularly dangerous while driving because of the side effects it can cause. Some of these include:

These side effects are commonly present even when prescription opioids are used as directed, so when they are abused and consumed in excess, the impact is often exacerbated. This further heightens the associated risk to the driver and anybody else on the road. Opioids and driving — whether in the form of heroin or a prescription — should never be mixed. This is true even if they are prescribed, and even if they are being taken appropriately.

Every year, over 38,000 people are killed in the U.S. in fatal car accidents. This number is staggering in and of itself, but it’s even more devastating when you consider the fact that in 2016, 43.6% of drivers who were fatally injured were found to have drugs in their system. Furthermore, over half of those drivers who tested positive for drug use were found to be under the influence of two or more drugs.

In addition to the deaths of these drivers, countless passengers and nearby motorists are injured and also killed because of their drug use. This 43.6% represents the portion of fatalities that would likely be avoidable were it not for the prevalence of drugged driving. If 43.6% of annual road fatalities were eliminated, approximately 21,000 lives would be saved every year. 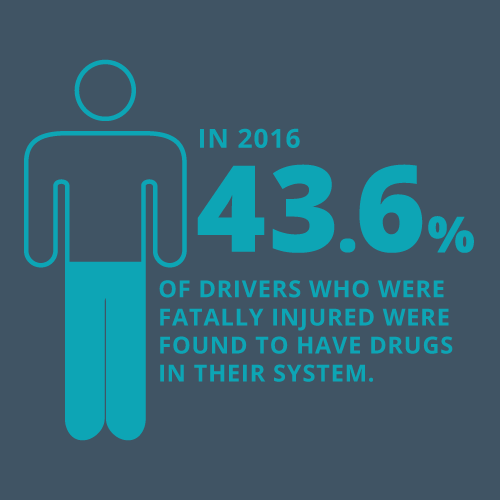 College is a time for experimentation, and for some students, that includes an exploration of drugs. Many young people underestimate the risks that this experimentation can bring and assume that drugs such as marijuana or cocaine are just a way to have fun. Unfortunately, though, a 2011 study revealed that as many as one in six students who had access to a car had operated their vehicle while under the influence drugs — not including alcohol.

Driving while under the influence of marijuana was the most commonly reported offense, followed by use of cocaine, and lastly, prescription pain medications. When combined with other common collegiate conditions such as sleep deprivation and peer pressure, the decision to drive while under the influence of drugs is often a deadly one. College should be a time to have fun and try new things, but drugged driving should never be a part of the experience.

A 2017 study found that 22.5% of motorists driving at night on the weekend were found to be under the influence of illegal, over the counter, or prescription drugs that are liable to impair driving. This may not be surprising considering that weekend nights are the time when people are out partying and socializing — and unfortunately, for many, drug use is a part of these activities.

With a high concentration of compromised drivers behind the wheel, though, weekend nights quickly become a treacherous time to drive. This is especially true because nighttime is already the most dangerous time to be on the road. Decreased visibility makes driving dramatically less safe, and if you add drugs to the mix, you are seriously endangering yourself and every other driver you encounter on the road. There is never a safe time to engage in drugged driving, but doing so at nighttime exacerbates the risk substantially. 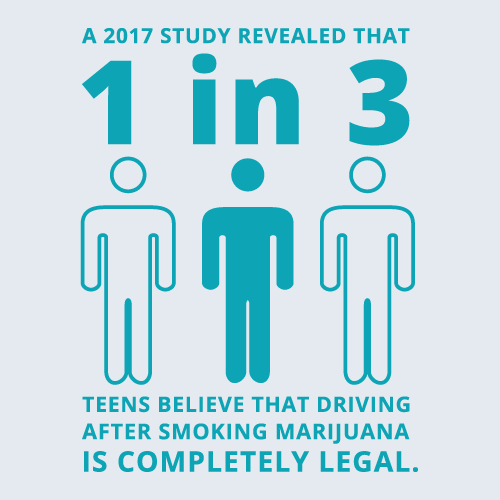 Some people who drive while intoxicated realize the risk they are taking and decide to get behind the wheel anyways. Others are unfortunately unaware of the risk they are taking and may not realize their driving ability has been impaired at all. This is commonly the case with marijuana — because it is legal to consume in many places, some people also assume that it is legal to drive while under its influence.

A 2017 study revealed that one in three teens believe that driving after smoking marijuana is completely legal. A portion of those, furthermore, reported that they do not believe there is any risk associated with driving after becoming intoxicated. This misinformation is potentially deadly. Driving while under the influence of drugs, including marijuana, can be a fatal mistake.

Getting Help and Getting Clean

Most people are aware of the risks of drunk driving. It is understood to be reckless and deadly, with thousands of lives claimed at its hands each year. It is less common, though, to hear discussion of drugged driving. Driving while under the influence of drugs can be just as dangerous as drunk driving, and it is becoming increasingly common, too. Whether the substance in question is marijuana or opioids, the risk is the same.